Scapegoating a minority on whatever grounds is antithetical to Christian faith 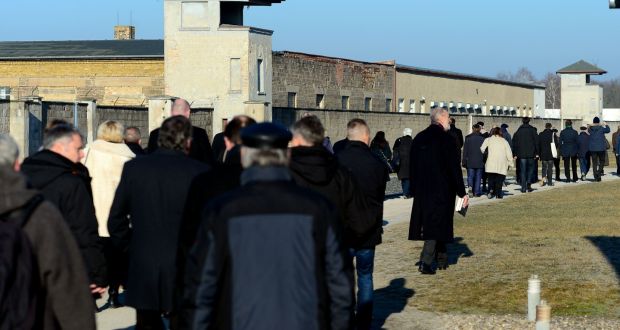 Visitors at the Sachsenhausen former Nazi concentration camp near Berlin. Christians were silent and colluded with systemic genocide by choosing not to know, even when knowing. Photograph: Maurizio Gambarini/AFP/Getty Images

The week after Easter I went on a four-day study trip to Berlinorganised by the Holocaust Education Trust Ireland. We visited memorials, museums, documentation centres that narrate the annihilation of six million Jews in broad daylight.

We learnt of the use of systemic fake news and the demonising of minorities in ‘normalising’ genocide. We visited Sachsenhausen, a concentration camp just outside Berlin where 30,000 died brutally.

Jews, homosexuals, Roma, Sinti, beggars, intellectuals, political opponents, even listeners to BBC radio were arbitrarily abducted, deported and murdered sadistically. Anyone with any physical or learning disability or mental illness was euthanised. Children were used in medical experimentation.

Nazism was a popular movement, for without the active and tacit support of the vast majority of people, the annihilation of more than half of the Jewish people of Europe could not have happened. With a few exceptions, Christians were silent and colluded with systemic genocide by choosing not to know, even when knowing.

Then I came home to celebrate a Holy Communion where all, irrespective of race, sexuality, age, disability, faith or origin, are equal sisters and brothers under God.

Old familiar words took on a renewed and chilling pertinence, a counter-cultural pertinence not just to societal division but to the very church itself where the gospel is used by some as an instrument of hate.

That American fundamentalist “pastor” Steven Anderson was invited to speak in Ireland while advocating the murder of LGBT+ people, preaching the subjugation of women, praying for the death of Barack Obama, denying the Holocaust and fostering Islamophobia is appalling and sends a chilling message to Christians and to our society.

Scheduled to speak in Dublin on May 26th last, he was denied entry to Ireland by Minister for Justice Charlie Flanagan, as he was to the UK, other EU countries, and Canada, among others.

Anderson embodies the ugliest form of Christian fundamentalism, but he marks out the shibboleths for a cohort emboldened by the rise of the far-right globally, namely: racism, misogyny, bigotry, anti-Semitism, Islamophobia and the use of violence to annihilate diversity.

It is easy to draw forth the basest instincts in humankind. History has taught us that. It is dangerous when these base instincts are equated with religious righteousness.

Today ‘unity amid diversity’ is more truly characterised by ethnic, sexual and religious diversity within our churches

This phenomenon, ironically, is facilitated and enabled by an unreflective Christian liberalism which avoids challenging ideologies that undermine hard-won societal advances made regarding the rights and dignity of the person.

In an asinine attempt to be fair to all and seek a middle way, all opinions and ideologies are given equal status. This is an intellectual and ethical cop-out that allows strident racism and bigotry free reign.

Anglicanism adopted the maxim “unity amid diversity”. Historically this referred to the coexistence of both Protestant and Catholic spiritual traditions within the one religious tradition.

However, today “unity amid diversity” is more truly characterised by ethnic, sexual and religious diversity within our churches. Like many cathedrals on this island, ours welcomes people of many different nationalities and faith backgrounds and all, irrespective of sexual orientation.

Our unity is in Christ and that engenders a mutual responsibility as well as an openness to life and to each other, and we are all enriched by this diversity.

Rallying people to scapegoat a minority on whatever grounds is antithetical to Christian faith, to democratic society and to the welfare and safety of all.

The church faces a crossroads. Bravely stand with people who were subjected to prejudice, vilification and exclusion daily, systemically and globally, or stand with those who use religion to vilify and exclude.

Last month the Church of Ireland met in Derry for its annual General Synod. Some present shared the beliefs of Mr Anderson, as no church is exempt from fundamentalism. The great majority of people in the Synod Hall, however, were decent and godly. However, what I learnt in Berlin is that being decent and godly is not enough.

The objects of hate have been identified clearly and unapologetically. We are required by Almighty God to take responsibility for the welfare of each other. If we choose to ignore the emergence of a strident, nasty fundamentalism that scapegoats people arbitrarily on ideological grounds, then as Christians we will now be doing what most Christians did during the Holocaust, to our eternal shame. Again.