Installation of Dignitaries at Advent Choral Evensong in Ferns Cathedral

New Canon in the Diocese of Ferns

The Reverend Ruth Elmes, Rector of Tinahely and Carnew Union, was installed as Prebendary of Kilrane and Taghmon at an Advent Choral Evensong service in St Edan’s Cathedral, Ferns on Sunday night, December 10th 2017. 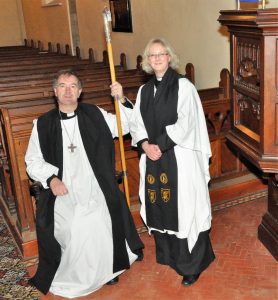 Her new title is now The Reverend Canon Ruth Elmes.

There were other installations of dignitaries on this occasion too – Canon Mark Hayden now has the title of Precentor, Canon Arthur Minion has become Chancellor and Canon Michael Stevenson is now Treasurer of the Chapter. 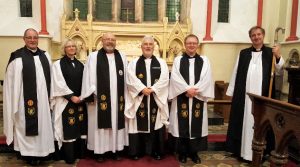 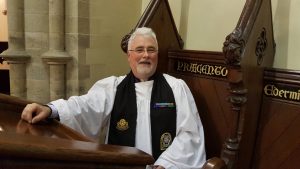 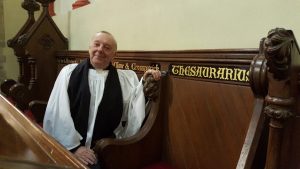 But what do all these titles mean and are there extra duties and benefits attached to them?

“Canons are clergy who have a stall in the Cathedral in what’s called the Chapter.

It goes back to a time when a cathedral was more like a house of a religious community and the Bishop was like the Father Superior. In the Middle Ages the Dean would have taken the role of archpriest and the canons were the clergy who worked with him from the cathedral.” 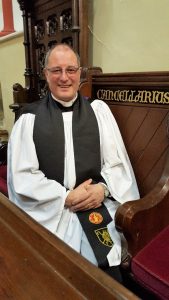 The titles were also related to their singing roles, he says.

“They were canons in that they sang the services together. They did the morning and evening prayer and other office services and then presumably went out to the outlying churches to take Sunday services and so on.

As time went on, however, the parishes had their own clergy and being made a canon became a favour bestowed on some clergy by the Bishop – it was like an extra feather in their hat, so to speak.”

But what of the other titles – what do they mean?

“The Precentor is meant to be the pre-eminent cantor – that is, he is meant to lead the singing of the services.

The Chancellor was really the registrar in the old days when there were a lot more disputes sorted out by the cathedral, by the church. He also had a role in education if there was a cathedral school and the Treasurer looked after the treasures and the financial matters of the cathedral.

Nowadays the titles are honorary and don’t involve duties or benefits (prebends).” 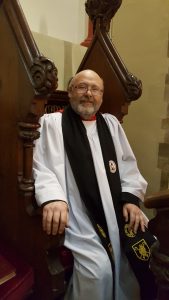 WHY A WEXFORD PREBENDARY WHEN SHE IS A WICKLOW RECTOR?

Canon Elmes was installed into the Prebendary of Kilrane and Taghmon after a vacancy occurred following the retirement of Canon Roger Harmsworth, the previous Precentor, last July. In this situation everyone else moved up one place and a new canon could then be appointed to the vacant prebendary.

Although she is a rector in County Wicklow, the Tinahely and Carnew Union of Parishes is within the Diocese of Ferns, hence Canon Elmes was qualified to be selected.

Related to the installation of canons, Bishop Michael Burrows states that, in ancient times, the prebendal parishes provided an income for the cathedral clergy (the prebendaries), to allow them to fulfil their duties at the cathedral.

“Nowadays there is no direct permanent connection between the canonries in the cathedral and specific parishes in the diocese but the stalls continue to bear their ancient titles,” he says.

“It is purely coincidence, then, if a canon nowadays happens to end up occupying a stall which also bears the name of his or her own parish.”

SERMON ABOUT MERCIFUL NOT FEARFUL JUDGMENT

The preacher at the special service was the very Reverend Dean of Leighlin, Tom Gordon, and in his sermon he focussed on judgment, the Gospel of Matthew and the challenges of Advent.

He spoke of how we should be asking, at this time of year, how we measure up.

It was his privilege to share the word of the Gospel at his friend Ruth’s installation as Canon, he continued.

“I do so joyfully as I have known Ruth as a friend and colleague for many years now and there is something remarkably resonant in her vocational journey as a priest but also with that other world which has shaped and formed her – the world of nursing and medicine.

How appropriate, then, to remind ourselves in the season of Advent, of the words of the Irish theologian Gabriel Daly who talks about God’s judgment in medical terms.

He describes how it should be grasped in the same way as a health professional makes a diagnosis and intervenes for the greater good of the patient. The diagnosis, the naming of a malaise, is needed for the healing, restoration and flourishing of the person and the community of faith.

Such diagnoses, such interventions may be painful, uncomfortable or indeed even embarrassing but they are for our ultimate healing and the healing of the world. In this sense God’s judgment is not fearful but is one of mercy and redemption.”

A PERSON OF REDEMPTIVE, GOSPEL HEALING

Ruth Elmes is such a person of redemptive, Gospel healing, Dean Gordon continued.

“She is intelligent, thoughtful and appropriately bold in speech… There is integrity in abundant measure but above all there is compassion, care and faithfulness to the Gospel and the ways of Christ… born, in no small measure, out of personal pain and loss…”

A wise and challenging person also, it was appropriate that her installation took place in this season of Advent – a ‘season of diagnoses, of compassion and of bold speaking’, he said.

He concluded by saying that Canon Elmes will enrich the cathedral chapter as she has enriched the Diocese and the lives of her friends and colleagues with her unique presence.

The Bishop then wished all the new dignitaries well and reiterated the Dean’s comments before closing the service with the blessing.

A RING TO FEEL THEM NEAR

Canon Ruth says that she won’t have any extra duties related to being a canon but she admits to being a little overawed by the honour.

“I never expected to be a canon after so short a time,” she said, “so I’m a little bit shocked, to be honest, and it was lovely to have my family here to witness it. I’m sorry my Dad wasn’t here – he was ordained also and an Archdeacon before he retired – I know he would have been very proud. I wore my Mum’s engagement ring so that I felt that they were close… I miss them both very much on occasions like this.”

The collection went to the Bishop’s Fund for Ministry, the choir was led by The Reverend Hilary Dungan and welcome refreshments were served afterwards in St Mogue’s Cottage.